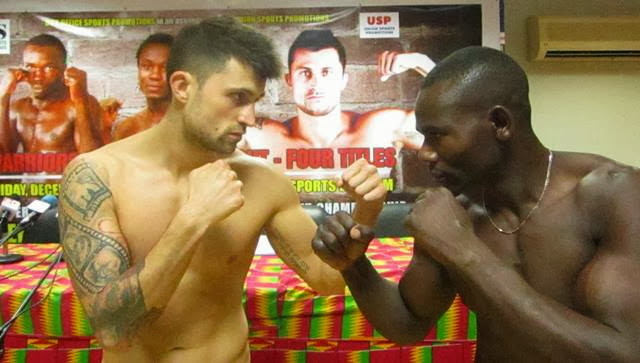 ACCRA, GHANA, DEC. 19, 2013: Boxers Premyslaw Opalach 13(12)-2-0 of Poland and Maisha Samson 8(4)-4(2)-2
of Tanzania
weigh - in today in a much fanfare atmosphere at the Accra Sports Stadium's auditorium before a battery of sports journalists from all the media houses in Ghana. The meeting of the two young Turks who landed in the capital city of Ghana ready for their much awaited duel, as like a hide and seek game.

Opalach weighed 167 lbs. while Samson weighed 165 and were both declared on weight by the IBF Africa & Mideast President Onesmo Alfred McBride Ngowi who will be at the ringside tomorrow to supervise the exciting rumble.

The ground started to shake when both boxers were asked to face each other and pose for the photo opportunity and it was the President of GBA who intervened to save the situation from generating to a fist fight as the two marauding young Turks aimed their arsenals at each other.

Asked how he would approach the fight tomorrow, Maisha promised fireworks and asked fans from all parts of Ghana to come in thousands to see his style of boxing as he teaches the Polish gunner a lesson or two. Speaking in Kiswahili language which was interpreted by his accompanied Kenyan boxing agent Thomas Mutua, he said that he flew all the way from Tanzania to win the title and not as a mere participant.

Opalach was more excited when he was asked how he perceived the game tomorrow. Speaking in Polish language with a Ghanaian interpreter, he said that he appreciated Maisha's talents as a good boxer and promised to give Ghanaians a good entertainment come tomorrow.

The tournament will take place tomorrow at the Accra Sports Stadium and promoted by Box Office Promotion Limited of Ghana and sanctioned by International Boxing Federation (IBF).

Ring officials for the tomorrow's rumble will be lead by the President of IBF Africa & Mideast Onesmo Alfred McBride Ngowi as a supervisor while Freddy Ghartey from Ghana will be the third man in the ring (referee). Judges will be Michael Neequeye, Emanuel Brenya and Clément Ashong all from Ghana.

Congratulations Ghana. Africa & Middle East is proud of you.
They Call it AFRICA & MIDDLE EAST.....! We Call it HOME
Posted by Super D (Mnyamwezi) at 11:45 PM