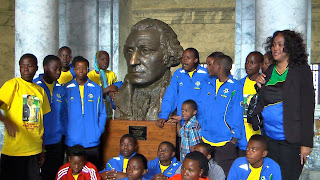 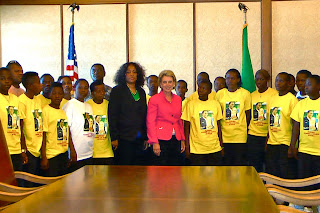 The Twiga Stars pose with Washington's governor, Christine Gregoire.
Photos and Story By Nisha Ligon http://www.twigastars.com/.
Today the Twiga Stars, Tanzania's national women's football team, visited the Washington State Capitol, where they were received by Governor Christine Gregoire. The Twiga Stars, who were brought to Washington State for a training tour by Rahma Al-Kharoosi, president of RBP Oil and Industrial Technologies, got the chance to learn about state legislative procedure, sing a Tanzanian song for their hosts, and to speak to the Governor herself. She wished them the best of luck and told the Tanzania ladies that she has a special interest in women's football as both of her daughters are footballers. Ms. Al-Kharoosi thanked the Governor for taking the time to speak to them, and added that it was inspiring for the girls to meet such an accomplished woman who has shown "yes we can." A special tradition at the Washington Legislative Building is to make a wish while rubbing the nose of a George Washington bust. The Twiga players each took a rub and wished to make it to the Women's World Cup (to be held in Germany in summer 2011). The Twiga Stars have been training in Washington since August 2, and are preparing for the African Women's Championship to be held in South Africa this October. The top two teams from the African Championship will proceed to the Women's World Cup in Germany. The Twiga Stars have shown they're ready for the competition by posting a number of impressive performances here in Washington, including a 4-0 victory over Dos FC last night. Asha "Mwalala" Rashid scored 2 goals, while Mwanahamis Omary and Fatuma "Kitunini" Mustapha each scored one. Ms. Al-Kharoosi said she's very happy with the teams performance and is confident that they are gaining the experience they need to succeed in the continental championship this
Posted by Super D (Mnyamwezi) at 3:30 PM