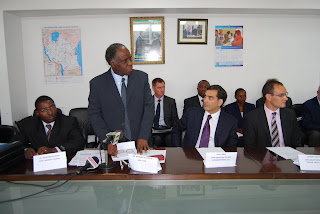 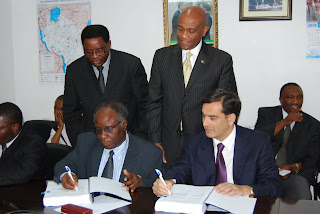 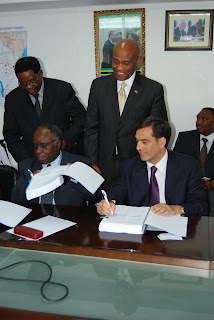 The Millennium Challenge Account–Tanzania (MCA-T), the Accountable Entity responsible for the management of the implementation of projects funded by the Government of United States of America through Millennium Challenge Corporation, awarded a $45 million contract on 27th August 2010 to a joint venture between Symbion Power and Areva. The contractors will design, manufacture and install 24 power substations in 6 Mainland regions and Zanzibar. .

MCA-T Chief Executive Officer, Mr. Bernard Mchomvu, congratulated the joint venture firms for winning the tender through competitive bidding procedures and urged them to perform an excellent job to the satisfaction of both the financiers and the people of Tanzania.

“We are very confident that you will deliver a high quality work, timely and as per the allocated budget. Do a job that you can look back with pride and satisfaction.”

“We are delighted to be awarded this contract to work with MCA-T to increase capacity of power supply to consumers which will eventually enhance social economic development for the people of Tanzania. We assure you that we will work hard with the view to complete the job on time covering all the 24 sites.”

Other components in the Energy sector include the laying of a second submarine power cable linking the Mainland to Zanzibar, approximately 40 km long (132kV), 100MW from Ras Kiromoni to Ras Fumba. The Contractor, VISCAS Corporation of Japan signed the works contract in April and has commenced design works prior to the fabrication of the cable. Another component is the Distribution Network Rehabilitation and Extension in Six Regions which will involve construction of a total of 78 networks made up of some 252 kms and 1,247 kms of 11kV and 33kV respectively. The package will supply power to villages and urban areas in six Mainland regions namely Dodoma, Iringa, Mwanza, Mbeya, Morogoro and Tanga.

In conclusion, Mr. Mchomvu said “on behalf of the Tanzania Government, I would like to express our much gratitude to the American people and in particular MCC for extending its valuable financial support and technical assistance to Tanzania. This has enabled us to sign what we have signed today. We have realistic expectations for an improved performance in the energy sector, both for the well-being of the people and a sustainable economic development of the country at large.

Photo of the event to be inserted here
####