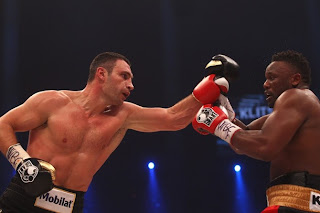 Vitali Klitschko upheld the legacy of his boxing family as he outscored his British challenger as referees made a unanimous points decision in favor of the Ukranian boxing powerhouse.

Klitschko never found it a hard task to defend his title on Saturday night as packed Olympiahalle in Munich witnessed sheer class and charisma of the Ukrainian boxer as he unleashed his fearsome punches on Chisora who had literally no answers in his kitty.

Vitali Klitschko, 40, and his brother Vladimir Klitschko now hold the WBO, WBA, IBO, IBF, and WBC titles among them as the Klitschko family had all the reasons in the world to feel proud of the two Klitschkos inside the Olympiahalle.

With this victory, Vitali Klitschko has now bettered his professional boxing record to 44-2 but it was never a walk in the park despite of the fact that the British Chisora always fell short of the target.

Chisora, a former Commonwealth champion, did try his luck to turn the bout into a controversial one but his gimmicks also fell short of the targets, just like his punches.

A pumped up Vitali Klitschko, while talking to media persons in a ringside interview, said, “Chisora put in a solid performance today but as a person, I have no respect for him”.

Vitali had an upper hand right from the start of the long-awaited bout and his dominance paid off in the paid in a big way as all the three judges had better numbers for the Ukrainian pugilist as they gave 118-110, 118-110, and 119-111 in his favor.

Not happy with the scores, British boxer Dereck Chisora clearly showed his opposition and demanded a rematch but the 12500-crowd in Olympiahalle had already witnessed the best in the business in the ring and started booing and jeering him.

Chisora told reporters, “This booing, I don’t mind as long as they paid money to watch the sport I love, I don’t mind. I want another fight. There will be a rematch or I will fight his younger brother”.

It is important to mention here that this was Chisora’s third loss in his last four fights as his record is now 15-3.

Vitali Klitschko was taller of the two, better of the two, more aggressive of the two, and in the end the ultimate winner in the Olympiahalle which was a perfect revenge for him against Chisora who had earned a bad name before the bout as he had slapped the Ukrainian at the weigh-in on Friday and also splashed water into his face during the pre-fight events.

Now Chisora is also demanding a fight against the younger Klitschko, Vladimir, who acted as a buffer during tonight’s bout.
Posted by Super D (Mnyamwezi) at 1:50 PM