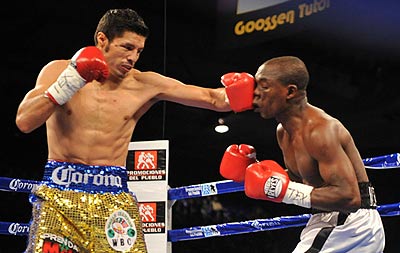 Celebrating his 30th birthday as well as Mexican Independence Day, WBC featherweight champion Jhonny Gonzalez (50-7, 44 KOs) scored an impressive second round TKO over Rogers Mtagwa (27-15-2, 19 KOs) on Thursday night at the County Coliseum in El Paso, Texas. After an even round one, Gonzalez opened up in round two and rocked Mtagwa with a series of big shots. The iron-jawed Tanzanian was definitely hurt, but the bout was waved off by referee Guadalupe Garcia before we could see if Mtagwa would have weathered the storm. Time was 2:15.
After the fight, Gonzalez again called out the best of his division. “I want the best, Elio Rojas, Yuriorkis Gamboa, Juan Manuel Lopez and the others at this weight. Thanks El Paso,a Mexico!” said Gonzalez. Manager Oswaldo Kuchle added “Tonight Johnny G has been confirmed as one of the best fight
Posted by Super D (Mnyamwezi) at 2:46 PM