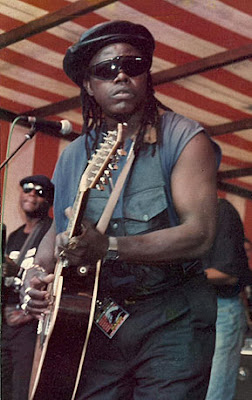 The Dk. Remmy Ongala Foundation is a charitable organisation, founded by Remmy’s daughter, Aziza Ongala, in memory of her father — an outstanding Tanzanian popular musician and social campaigner.
The Foundation exists to help the poor and disadvantaged in Tanzania, and to promote safe sex and other humanitarian goals espoused by Remmy; making use of Remmy’s musical legacy, worldwide reputation and high profile.

Born in Congo and orphaned at a young age, Ramadhani Mtoro (Remmy) Ongala played in a number of Congolese bands in his youth and at the age of 29 moved to Tanzania to join Orchestra Makassy, his uncle’s band. Three years later he joined the Orchestra Super Matamila and soon became its leading star, vocalist, guitarist and songwriter.

A proponent of what he called ‘serious dance music’, Ongala mixed the Congolese soukous style with thought-provoking, socially aware and often controversial Swahili lyrics. His song Mambo Kwa Socks (Affairs of Socks), a plea for young men to use condoms and practice safe sex, was one of his most popular releases.

Thanks to Peter Gabriel’s Real World record label, Remmy Ongala reached a worldwide audience from 1989 on, with his albums Songs for the Poor Man and Mambo. In the 1990s, he became a regular performer at the Womad festival (World of Music and Dance).

‘Doctor’ Remmy, as his Tanzanian audience called him, suffered a stroke in 2001 and in later years was troubled with the effects of diabetes. He died in December 2010 at the age of 63 from kidney failure. Upon news of his death, the local radio stations played his music continuously.
Posted by Super D (Mnyamwezi) at 12:28 PM