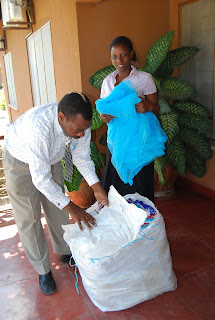 Dar es Salaam, 18 October 2010: DHL, the leading logistics company, today announced that DHL Global Forwarding Tanzania, the freight and forwarding division of DHL has donated 1,500 mosquito nets to non-governmental institutions (NGOs) in Tanzania, in a bid to boost the fight against Malaria in the country. The Long-Lasting-Insecticide-Treated Nets (LLINs) contributed by DHL will benefit SOS Children’s Village Tanzania, which will receive 1,000 nets, while the remaining nets will be delivered to other NGOs in need of support. The donation was made on behalf of delegates of the inaugural Africa-Singapore Business Forum (ASBF).

“This initiative is part of DHL’s commitment to social responsibility, aligned to the “GoHelp” community investment pillar, which seeks to build sustainable communities in countries DHL operates in. Malaria is a pressing concern in Africa and this donation is part of DHL’s continued commitment to make a positive difference in the health and well-being of Tanzania’s local community,” said Mr. Amadou Diallo, CEO, DHL Global Forwarding Africa and South Asia Pacific.

Sub-Saharan Africa is the epicenter of the world’s malaria control activities, with 90 percent of malaria deaths occurring in the continent.1 According to statistics from the National Malaria Control Programme, an estimated 16-18 million cases of malaria occur each year, resulting in more than 100,000 deaths in Tanzania. 93% of the country’s population is at risk, where the mosquito-borne disease is the main cause of death of more than one-fifth of children under five years old and among pregnant women.2 Beyond the impact on society, the financial cost of malaria is hindering economic development due to the high cost of medicines and reduced productivity. Malaria accounts for some 30% of the national disease burden in Tanzania.

“At DHL, we realize the challenges faced by the local community in this high-risk malaria prone region and it is important that we support the fight against Malaria and efforts to reduce the mortality rate. In future, we want to see children in this region grow up to be healthy adults and realize their full potential,” said Mr. Shreekesh Karia, Country Manager, DHL Logistics Tanzania, adding that, “treated nets are the most effective and efficient way to prevent the spread of malaria and according to WHO, treated mosquito nets have been shown to avert around 50% of malaria cases.”

As part of its work in Tanzania, SOS Children’s Village also supports more than 1500 children in the Family Strengthening Program (FSP). This program is intended to reach as many vulnerable families within the communities as possible to build-up their capacity in caring for their own children as a strategy of preventing child abandonment.

”One can never do too much to ensure that every child grows up in a safe, healthy and supportive environment, and malaria prevention is key in ensuring that the country’s future generation has a ‘safe place to grow’,” said Rita Kahurananga, National Director, SOS Children’s Village Tanzania. She also elaborated that the LLINs donated by DHL will reach about 95% of the children support in the Family Strengthening Programs in Dar Es Salaam, Muwanza, Arusha and Zanzibar. They will be distributed to the Children’s Villages (CVs), and thereafter to the homes of the children in the communities.

Currently SOS Children’s Village Tanzania has 3 CVs in Dar, Zanzibar and Arusha, supporting 419 children in Family Based Care homes. There are plans to extend support to other regions and the growth strategy also includes Iringa, Mbeya and Mtwara.

DHL – The Logistics company for the world

DHL is the global market leader in the logistics industry and “The Logistics company for the world”. DHL commits its expertise in international express, air and ocean freight, road and rail transportation, contract logistics and international mail services to its customers. A global network composed of more than 220 countries and territories and about 300,000 employees worldwide offers customers superior service quality and local knowledge to satisfy their supply chain requirements. DHL accepts its social responsibility by supporting climate protection, disaster management and education.

DHL is part of Deutsche Post DHL. The Group generated revenue of more than 46 billion euros in 2009.

SOS Children’s Village – A Loving Home for Every Child

SOS was founded by Herman Gmeiner when he established the first SOS Children’s Village (SOS CV) in 1949 in Imst, Austria.

SOS CV is an independent non-governmental and non-denominational social development organization which focuses on the long-term family-based child care approach in support of orphaned and abandoned children, and it is committed to the welfare of children - often throughout the whole of their childhood – and to strengthening families and communities as a preventive measure in the fight against abandonment and social neglect.

Currently, SOS operates in more than 132 countries in the world and it has more than 500 children’s villages, as well as many other SOS facilities such as schools, social centres, medical centres and Vocational Schools.

SOS CV Tanzania has 3 CVs in Dar, Zanzibar and Arusha, supporting 419 children in Family Based Care homes, each home with a mother and 10 children. SOS CV’s growth strategy also includes Iringa, Mbeya and Mtwara. The SOS CV Tanzania accepts children from age 0 to 6 years, and these children are being cared for until they become independent, self-supporting adults